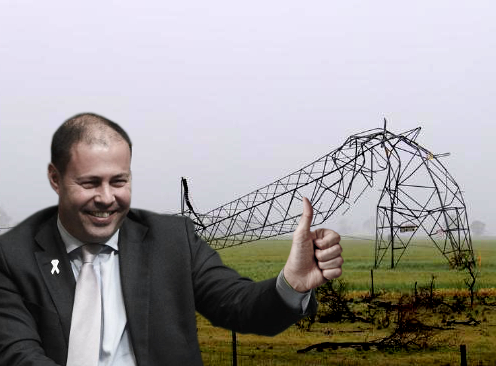 Prime Minister Malcolm Turnbull has refined his line of attack on renewable energy.

“Let me be very clear, of course windmills did not cause a black-out, the black-out, as I have said many times, was caused by a storm breaching transmission lines,” he said of the dramatic SA black out on Monday.

“However, the introduction of a massive amount of wind energy, so variable renewable energy made the SA grid very vulnerable.

“Very, very vulnerable indeed to breaches in transmission lines and the overloading or pressure on the interconnector with Victoria which, as you know, is bringing in coal-fired power from the Latrobe Valley.”

While it is a few steps back from directly blaming renewable energy, Mr Turnbull’s new view does not match the experts’.

The Australian Energy Market Operator (AEMO) says South Australia’s extreme weather has been the prime cause of the transmission system faults, failing to come up with any causal links for the renewable power sources.

Regardless of where the power was coming from, the network would have gone down.

Documents obtained under freedom of information laws by the Australia Institute show the prime minister’s department was informed that wind energy levels were not to blame for the catastrophic South Australian outage last year.

The advice said; “There has been unprecedented damage to the network (ie bigger than any other event in Australia), with 20+ steel transmission towers down in the north of the State due to wind damage (between Adelaide and Port Augusta),” according to Fairfax Media.

“The electricity network was unable to cope with such a sudden and large loss of generation at once. AEMOs advice is that the generation mix (ie renewable or fossil fuel) was not to blame for yesterday’s events – it was the loss of 1000 MW of power in such a short space of time as transmission lines fell over.”

The debate was renewed last week when another SA outage saw power cut to 90,000 homes and businesses.

Federal Labor energy spokesperson Mark Butler and SA Energy Minister Tom Koutsantonis say AEMO chose not to turn on a second generator at Pelican Point on Wednesday afternoon, which they claim would have stopped the blackouts.

SA Greens Senator Sarah Hanson-Young accused AEMO of being “asleep at the wheel”, asking; “How did you stuff it up so bad?”

AEMO says it was forced to undertake emergency load shedding following a combination of factors leading up to the evening power peak.

“Based on where our investigations are at, AEMO does not accept public statements being made questioning AEMO’s capability or that we didn’t manage the power system in a safe, secure state,” it said in a statement.

“Further, AEMO does not accept the assertions that some generators that were available to enter into the market could do so.”

Meanwhile, a coalition of business, energy, investor, climate and welfare groups have issued a wake-up call to those in the energy debate.

They say the argument itself is behind uncertainty in the power grid; killing off interest in upgrade or new facilities.

The joint statement from 18 groups (including the Business Council of Australia to the Australian Council of Social Services) is an attempt to break months of zero sum political debate about energy policy, power prices and reliability.

The statement calls on politicians “from all sides of politics and all levels of government ... to come together to work through the necessary solutions to our energy market challenges”.

It notes that the Council of Australian Governments “has already established a strong policy process for this, the Finkel review”.

“Politicians need to back it and work with it,” the joint statement says.

The Federal Government has pre-empted the major review by chief scientist Alan Finkel; ruling out carbon trading in the electricity sector.

Malcolm Turnbull welcomed the joint statement and the review, claiming they bring him certainty that “unrealistic state-based targets” create “huge power bills for families and businesses and unreliable supply”.

But some of the biggest businesses in the country say “there is simply no room for partisan politics when the reliability, affordability and sustainability of Australia’s energy system is at stake.”

“We've never ruled out the nuclear opportunity for energy. We made it very clear that we were not in the slightest bit interested in continuing to pour money into the hopeless case which was a nuclear repository in South Australia,” he said.

“The royal commissioner ruled out nuclear energy in South Australia but there will be a time when it may become viable, and desperate times call for desperate solutions, and we are in a desperate situation.