Light shines on building, buying and burial in NSW 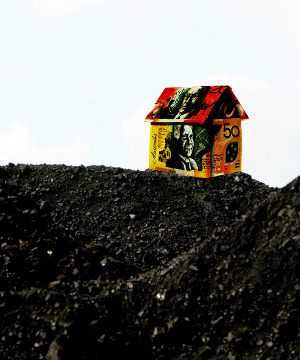 One of Australia’s largest coal supporters has given a glimpse of how much money it costs to “do business in New South Wales”.

Embattled coal magnate Nathan Tinkler has told the Independent Commission Against Corruption that he has spent tens of thousands on political donations made to buy favour or bury the opponents of his business operations.

Mr Tinkler said he made a $45,000 donation to the Nationals party in Newcastle, hoping it would “grease the wheels” for approval of a proposal for a billion-dollar coal loader at Mayfield.

The corruption investigation saw an expletive-laden email Mr Tinkler sent to his right-hand-man Troy Palmer, in which he complains that the Nationals Party were “doing f**k all” for him, despite the significant donations.

When asked why he made the donations, Tinker said it was too push for a feasibility study to be launched into his project.

“I thought it would be more likely I'd get the hearing,” he told the commission.

“Political parties need financial support. You're more likely to get a hearing if you're part of that,” Tinkler said.

“I've given money to much worse people... that's the way we do business in New South Wales.”

Mr Tinkler also told the commission he gave $50,000 to the Newcastle Alliance Group “to get rid of” Newcastle's state Labor MP Jodi McKay.

He says he wanted someone more favourable in her seat.

Ms McKay has earlier alleged that Mr Tinkler tried to bribe her to approve the coal loading plan. But she refused. She broke down in tears on the stand when she found out that Mr Tinkler's Buildev Group was behind an illegal campaign flyer condemning her campaign.

“I thought she was dead in the water. I didn't even think she'd get pre-selection. I wanted her gone,” he said.

The often outspoken business figure became impatient during his time on the ICAC stand.

“I'm starting to see why this has gone on for three weeks,” he said, after being asked to repeat what he thought he would gain from donations.

Mr Tinkler appeared to be tired of the investigation into seemingly common business practices, saying during an adjournment that “this is the most boring sh** I've ever seen”.

Tinkler is appearing as part of ongoing investigations due to his company Buildev’s links to a company called Eightbyfive.

The ICAC says Eightbyfive was a sham company created to disguise political donations from property developers, which were banned under electoral law after 2009.