A company in WA is looking to set a number of world-firsts with a project to build a wave-powered desalination plant.

Perth-based Carnegie Wave Energy wants to be the first company in the world to build a wave-powered desalination plant and a wave energy project that delivers both electrons and fresh water. Their announcement comes after the company signed a co-operative agreement with the WA Water Corporation to support a pilot desalination project alongside the Perth Wave energy demonstration currently being built near the Garden Island naval base off Perth.

The city already relies quite heavily on desalinated water, after building the first large-scale mainland de-sal plant at Kwinana in 2006 and this year breaking soil on the second. Together the plants will supply about half of the city’s drinking water needs - around 100 billion litres.

The pilot plant will integrate readily-available reverse osmosis desalination technology with the power-generating infrastructure of the adjoining wave energy project. The project is made possible by a $1.27 million funding payout from the Federal Government’s AusIndustry Clean Technology Innovation Program.

The plant will see submerged buoys 11 metres in diameter channelling water from offshore to the plants, either to run hydroelectric turbines or provide saline water to the desalination rig. 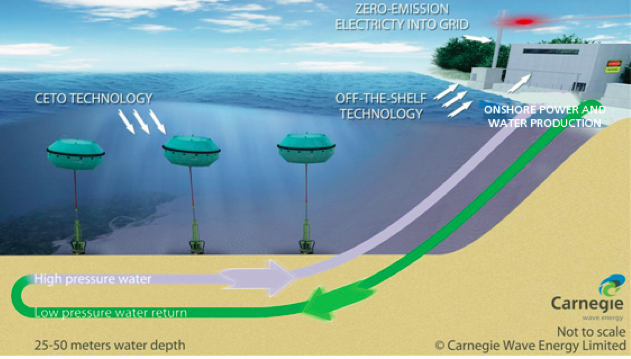