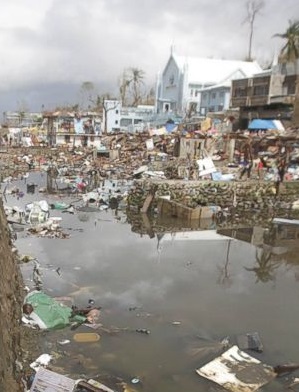 The chairman of the United Nations' Intergovernmental Panel on Climate Change (IPCC) has spoken out, calling on individuals, grassroots and community groups to push for real action on climate change.

IPCC chairman Rajendra K Pachauri said at an address in Copenhagen that unless people use their collective will for change, society will pass on “a lousy, spoilt and defiled planet” to the following generations.

Speaking at the same time as the Philippines was ravaged by one of the worst storms on record, Mr Pachauri said; “It's the will of the people that will be supreme.”

“The projections of the IPCC working group report are very, very clear,” he said

“The impacts are going to become progressively negative and they're going to be the worst for some of the most underprivileged societies on earth.

Pachauri spoke about the upcoming series of reports from the IPCC, due out over the course of the next year. The next reporting cycle will feature studies containing more evidence of human impacts on the environment; beginning to tackle the future implications, possibilities for change and suggestions for policy responses.

For those who feel hoarse in the throat from speaking out about the changing planet, Mr Pachauri says to persevere.

“If you get enough of a consciousness to take action and this feeling snowballs, then you'll probably get action on an unprecedented scale because I think human society has the means, the capacity and the technologies to be able to bring about change in a radical direction,” he said.

“In the fourth assessment report we said that vested interests would be a major barrier, but that's a fact of life. We just have to get over it. Whenever there is change there will be some who feel threatened.

“But I think in the ultimate analysis it's the will of the people that will be supreme... creating awareness, creating understanding, particularly in democracies where people will demand action from every section of society, certainly governments and also the corporate sector,” Mr Pachauri said.

Though the scientific community and its reports deal largely in future projections, it is difficult not to be alarmed at extreme events affecting the Earth already.

A sobering quote from the Climate Change Commissioner of the Philippines, Yeb Sano said:

“Anyone who continues to deny the reality that’s climate change, I dare them pay a visit to the Philippines right now...”

“To those communities standing up to unsustainable and climate-disrupting conventional sources of energy, we stand with them.”

“I speak for the countless people who will no longer be able to speak for themselves after perishing from the storm... We can take drastic action now to ensure that we prevent a future where super typhoons become a way of life,” Sano said.