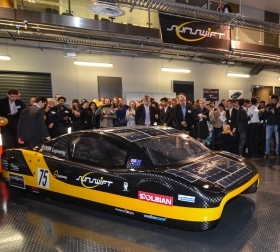 A team of engineering students at the University of New South Wales has had a re-think of the traditionally super-sleek solar car design, remodelling the sun-mobile with humans in mind.

The UNSW team unveiled its new look solar racer at a launch event in Sydney this week, the carbon fibre imbued eco-racer has also been designed to compete in the 2013 World Solar Challenge this October.

In a departure from traditional one-person trimmed-down design, the team set out to create a more human-friendly ride. The new UNSW car named ‘eVe’ more closely resembles a conventional sports car; featuring two doors, four wheels and room for a passenger, it has solar panels on its hood and roof and a yellow-racing stripe along the side (for extra speed).

The project manager, mechanical engineering student Sam Paterson says: “We wanted to create the sort of car you could drive anywhere, all while keeping the design cool and producing zero emissions. We think this car is a symbol for a new era of sustainable driving in Australia.”

The Sunswift team that designed and built the car is comprised of undergraduate business and engineering students from UNSW. It’s the team’s fifth solar racer since being formed in 1996 by its original members. In 2011, Sunswift’s fourth generation car set a world record, becoming the fastest solar-powered vehicle, reaching a top speed of 88 km/hour.

This new generation of solar car from UNSW was partly supported by a crowd-funding campaign which raised $27,000 dollars; it will hit the road for the first time in September for testing before rolling to the Northern Territory for the race.