Drone docks give permission not to land 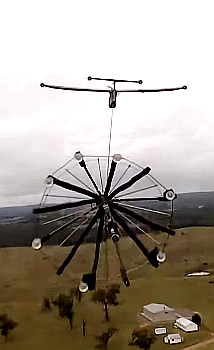 A University of Sydney researcher has successfully tested a method for docking and refuelling drones in mid-air.

“At the moment, a UAV's [unmanned aerial vehicle] range and endurance is constrained by the amount of fuel that can be stored on board,” said PhD student Daniel Wilson.

“As you add more fuel, the weight of the aircraft increases, which means more fuel must be consumed to stay aloft.”

Wilson has used a combination of precise measurements from an infrared camera, with GPS and inertial sensors to allow the sky-high docking to occur.

“There are two autonomous aircraft, a leader and a follower,” he explains.

“The leader tows a cone-shaped, parachute-like drogue. The objective is for the follower to autonomously dock its nose, within the drogue.

“Initially both the aircraft rendezvous to a formation position where the follower's infrared camera can observe infrared LED markers on the leader's wingtips and tail.

“Once docked, the follower is commanded to station for a certain amount of time to simulate refuelling or recharging. The follower disconnects and resumes its mission.

“In addition to docking, this system could be used for any application that requires highly accurate positioning, relative to a static or moving target. This could include, precision landing on ships, net recovery or close formation flight,” Wilson said.

“The biggest challenge is the highly accurate and reliable relative positioning performance to allow a second aircraft to dock with a small target, in the air, and amidst turbulence,” he said.

“This type of technology is useful in situations where greatly extended persistence over an area is desirable, such as the search for the MH370.It would allow aircraft to use their fuel to search the target area, rather than flying back and forth from land. It could also be used to keep high-flying UAVs airborne, in place of satellites for communication.”

As part of his ongoing efforts to meet the engineering challenges, Wilson developed an autopilot and software development process which twice won him the International Simulink Design Challenge.

A video of the development is accessible below;